The pavement and the beach

Exposition collective, Paradise Row Gallery
/2
The pavement and the beach

A group show curated by
Mick Finch and Guillaume Paris
in collaboration with Paradise Row.

The exhibition's starting point is a phrase that defines an historical moment:  "Sous les pavés, la plage" - 'Beneath the pavement, the beach' - was hurriedly scrawled beneath the windows of a Parisian shop front during the May 1968 student protests that escalated into the largest strike in history, posing the most serious challenge to the status quo in any modern Western nation.

Inspired by the Situationist International, the slogan conjures imagined battle lines: On one side the manufactured world of power, efficiency, subjugation, work, consumerism and regulated thought. On the other, an utopian world of radical leisure, freedom and imagination, situated, metaphorically, on the beach.

Earlier this year, during the student protests in London against the cuts in education, the phrase reappeared, ghost-like, on a wall in the central quad of University College London. A symptomatic appropriation, torn from its heroic past and pressed into the present, the slogan seemed strangely second-hand, insubstantial and inert.

The beach has long since been colonized by capital. The logic of globalization has transformed symbolic orders to serve its own ends, refashioning cultural forms upon models of communication and spectacle. The sphere of leisure and entertainment, far from being a refuge, has become an arena in which power insidiously dreams itself into new disciplinary forms.

This exhibition is a reflection on the historical shift that has undercut the utopian hopes encapsulated in the slogans of May '68.  It explores the debris and flotsam that have washed up onto the receding shores.

The Pavement and the Beach is curated by Mick Finch and Guillaume Paris in collaboration with Paradise Row and is part of Insidious, an on-going project of exhibitions, events and publications by Finch and Paris, mapping out the aforementioned issues and the critical strategies they give rise to. 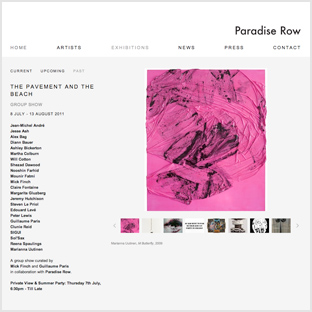 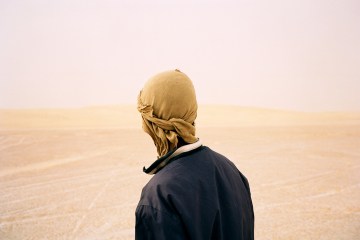 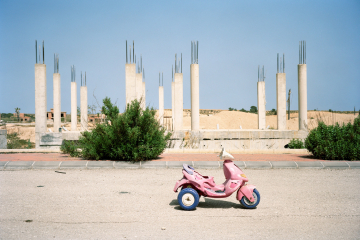 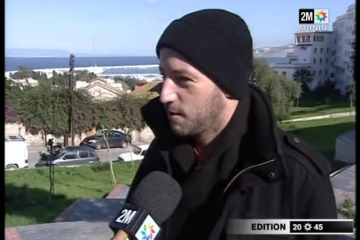